User-generated content, or UGC, is quickly becoming a sure-fire way to transform casual audiences into loyal fans and customers. The evidence is irrefutable – consumers trust UGC, with 79% of them saying it “highly impacts” their purchasing decisions.

Try to reach the 4% with paid ads.

But the real question is: how can you come up with low-maintenance UGC campaign ideas to guarantee an endless stream of genuine content?

We’ve got 10 great ideas for you, but before we get into those, it’s good to know the basic building blocks of great UGC marketing:

How to Create UGC for Your Brand

If you already have customers talking about your brand – that’s great! But even if you have a loyal following of brand advocates, you want to acknowledge those customers and reward them so they feel heard and continue supporting your brand.

Encouraging your customers to share UGC will ensure you generate a steady stream of content. But if you’re a new brand or you haven’t quite mastered UGC yet you might need to persuade consumers to create it. To get started, try one of the below tactics:

Most of the UGC campaign ideas we’ve shared below have used one (or a combination) of these tactics to achieve maximum participation from their customers. Whatever tactic you choose needs to fit your brand and its distinct objectives.

So, how can brands ignite engagement within their community and coax consumers into creating amazing, yet genuine UGC? Well, with any luck, these creative UGC campaign ideas will inspire you to come up with your own campaigns so you can benefit from masses of UGC that will ultimately help drive conversions for your business.

So, without further ado, here are our favourite UGC campaign ideas. Ready to get inspired?

Ah, the Starbucks Cup Contest. This was been a long-running annual campaign that had been running since 2014. It started as the #WhiteCupContest and evolved into the #RedCupContest, as a means of celebrating the holiday season. The contest involved the brand asking customers to adorn a Starbucks cup with their own creative artworks each year.

Customers essentially used the Starbucks cup as a plain canvas, drawing their own design on the cup. From there, they could upload a photo of their decorated cup to social media using the campaign hashtag. Starbucks then displayed the best designs on their social pages, and often on their blog, too. At one point, it even made the cup designs into real cups, honouring the artists.

This campaign shone a light on local artists and creatives looking to gain exposure, while at the same time raising brand awareness for Starbucks. Each social share generated more exposure for Starbucks, as their cup features the brand logo front and centre. The campaign also highlighted the durability of the cups. 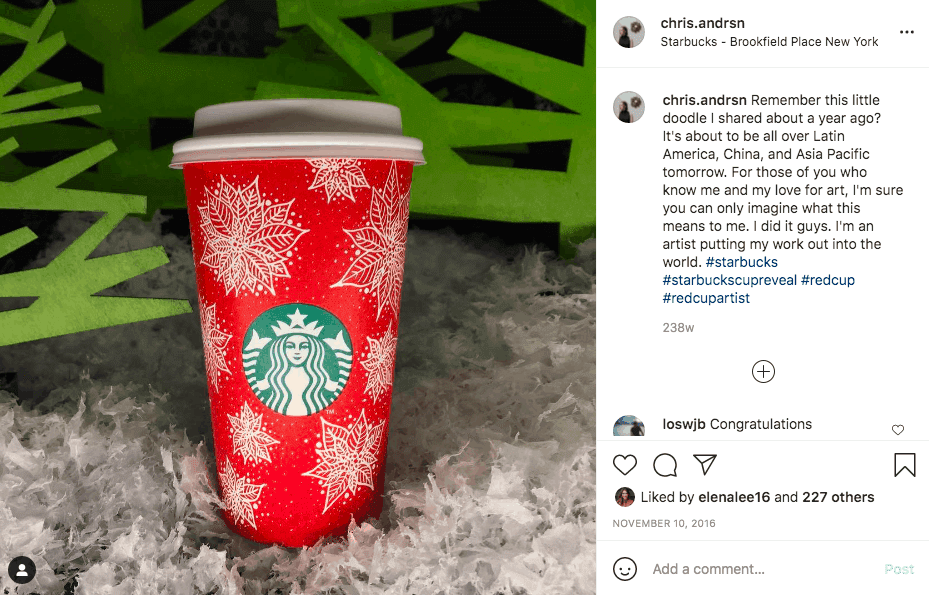 What if you could use the power of UGC to develop an entire community of brand loyalists? It’s been a tough time for the travel industry lately, but UGC can still act as a great tool to inspire local tourism and keep the wanderlust alive.

This contest morphed into an initiative called #YourShotPhotographer, which has millions of posts on Instagram. This initiative was so successful that National Geographic created a page dedicated to showcasing these user-generated photos, which has over 5.6 million followers; an entire community of content creators and nature lovers. The account is comprised solely of user content.

Beauty brand Glossier is no stranger to the world of social media and is consistently called out as a best practice example for brands looking to establish a cult social media following fast. Glossier has had enormous success in eliciting high levels of engagement and through user participation initiatives. It has had several fantastic UGN campaign ideas over the years which have helped the brand foster a dedicated and highly engaged community. In fact, everything down to Glossier’s stores and its baby pink packaging is designed to be highly “grammable”. 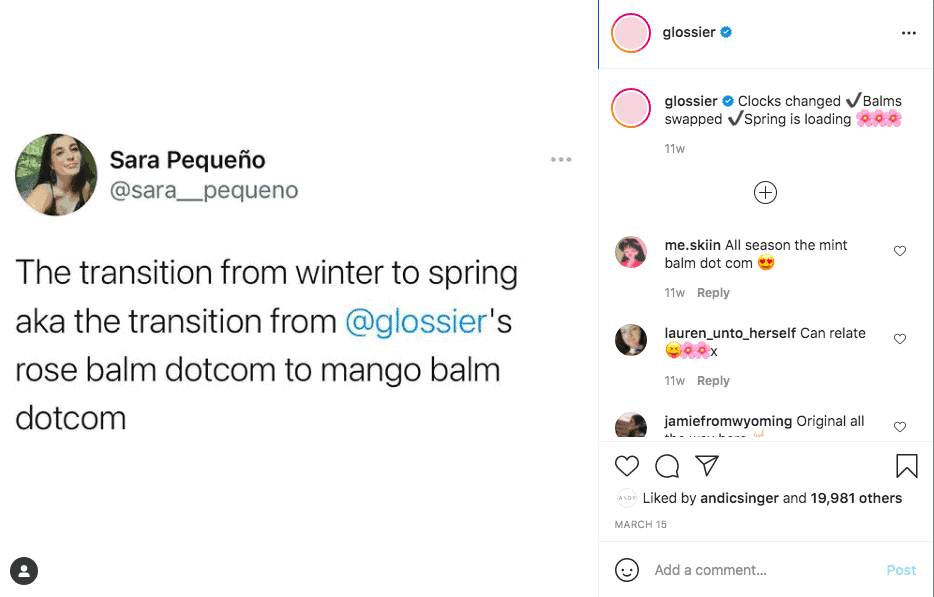 The brand has even gifted prizes to over 500 of its “superfans” who were engaging with them regularly on social media. This strategy puts the power back into the hands of Glossier’s loyal customer base, turning them into devoted brand advocates. It also cements Glossier’s reputation as a highly authentic brand that genuinely cares about its customers.

But Glossier also goes one step further with UGC, integrating user reviews into the sales process. When users are browsing individual product pages on the Glossier website, they can read customer reviews and see images of how other customers are using the brand’s products.

UK fast-fashion retailer Topshop is another brand that utilises UGC to support their content strategy, all the while positioning themselves as relatable and user-centric. In 2014, Topshop piggybacked off the hype around London Fashion Week to create its own “virtual runway” using the power of UGC.

Users simply had to upload their fashion shots to social media using #TopshopWindow for a chance to be featured in the window display at the brand’s iconic Oxford Circus flagship store. In this way, users amplified the reach of the brand and the campaign, yet were also rewarded with a unique opportunity; by seeing themselves in the Topshop store window. The campaign promoted various Topshop clothing items, ultimately leading to a 75% increase in sales during the campaign period. 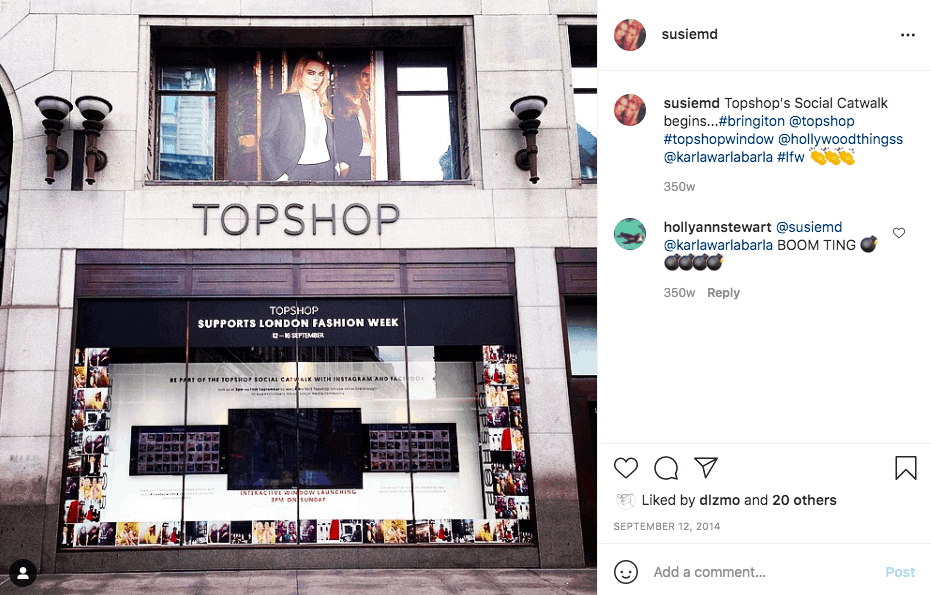 Grab your UGC guide for Instagram marketers and learn how to make a killer UGC engine!

World-renowned fashion brand, Calvin Klein, launched its #MyCalvins campaign back in 2014. Initially, the campaign was amplified by influencer content and big-name celebrity endorsements by stars like Justin Bieber.

Today, however, the campaign is more about the everyday consumer. The fact that brand advocates are still using the hashtag to post product posts today is a testament to its success, and it continues to generate exponential levels of engagement for the brand. #MyCalvins has over 800,000 posts on Instagram and showcases how the brand’s products look on all kinds of people, no matter their gender, body type, or personal style. The brand still has a dedicated landing page and encourages its customers to post their shots and tag the brand “for the chance to be featured”, which is evidently a strong incentive for loyal fans.

Although the campaign’s messaging has evolved over the years, the concept remains the same. It is so effective because it celebrates its customers and all the different ways that in which they style Calvin Klein products. More recently it has begun to focus on a more diverse range of body types and people. 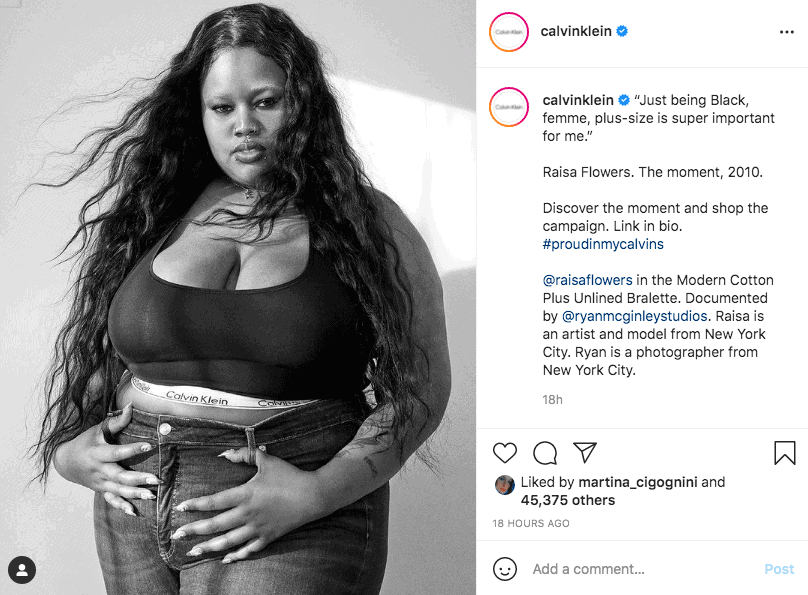 How does a beverage brand establish a connection with consumers? Well, if a brand was going to try, of course, it was going to be Coke. The “Share a Coke” campaign was first launched in 2011 in Australia, in an attempt to “create a more personal connection with consumers”. It printed the most popular names of people on Coke cans in countries around the world. Customers were encouraged to try to find their name and then post about it on social media using #ShareACoke. The campaign evolved over the years, with Coke adding more generic nicknames to the cans, like “Buddy”, or “Nan”, as well as slang that was relevant to each country.

In total, consumers posted over half a million photos, and the campaign continues to be successful to this day. Why? Because it uses personalisation to empower consumers and the “sharing” aspect of the campaign helps them connect with others. Of course, not every brand has the logistical capability to be able to personalise their packaging in this way, but it just goes to show how a simple concept can encourage UGC and bring people together. 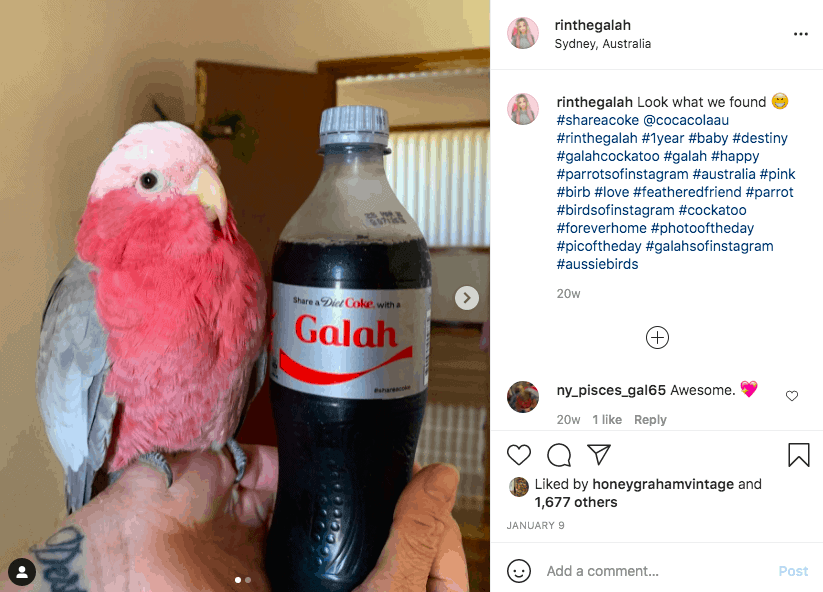 UGC is crucial for the travel industry – after all, brands can’t be everywhere at once! Airbnb revolutionised the travel industry in the early 00s by putting customer experience at its heart. For instance, the customer experience was at the forefront of the website’s development from the beginning, when the brand began focusing on creating highly personalised pages that were relevant for users.

Airbnb uses a lot of UGC in their social content strategy – which makes sense. The brand’s ethos is all about community, so why not use feedback and imagery sourced from that community? Polished content would feel out of place on the brand’s social pages. In fact, UGC drives 80% of the brand’s engagement on Instagram. Airbnb’s GM in Northern Europe, James McClure, has even been quoted saying that community and customers are “the best marketing asset” that a brand can have. 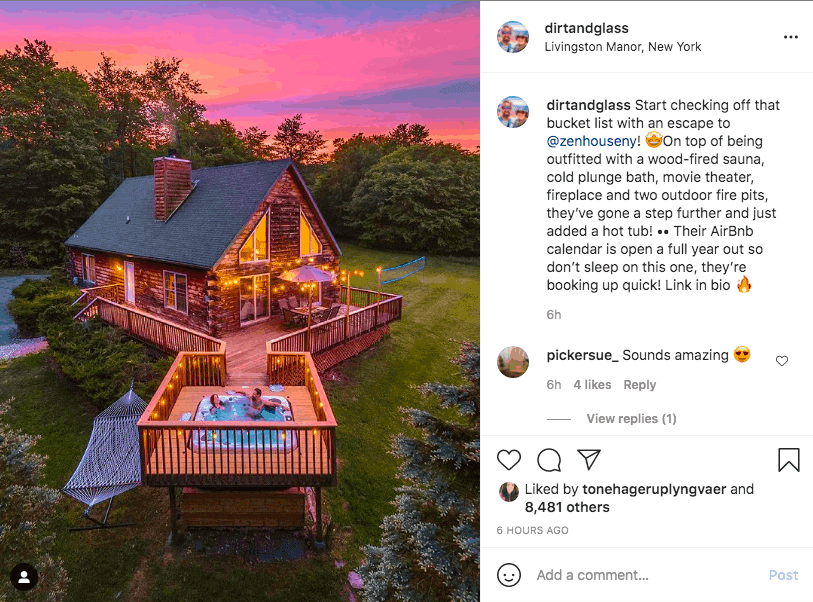 The telecommunications industry is notorious for copping a lot of negativity from customers. T-Mobile played on the frustration consumers were experiencing by creating a campaign to help people “break up” with their current mobile phone carriers. They used a simple Facebook application to help users create “break up letters” that they could send to their phone providers. The content produced as a result was hilarious, and, as a result, received a huge amount of UGC and subsequent engagement on social media.

To date, the campaign has received over 2.7 million app views and generated almost 70 million social media impressions. The campaign was so successful, in fact, that T-Mobile continued it within its stores. New customers in the store could print out a break-up letter and post it on Twitter using #BreakUpLetter. This helped generate additional social media impressions for the brand. 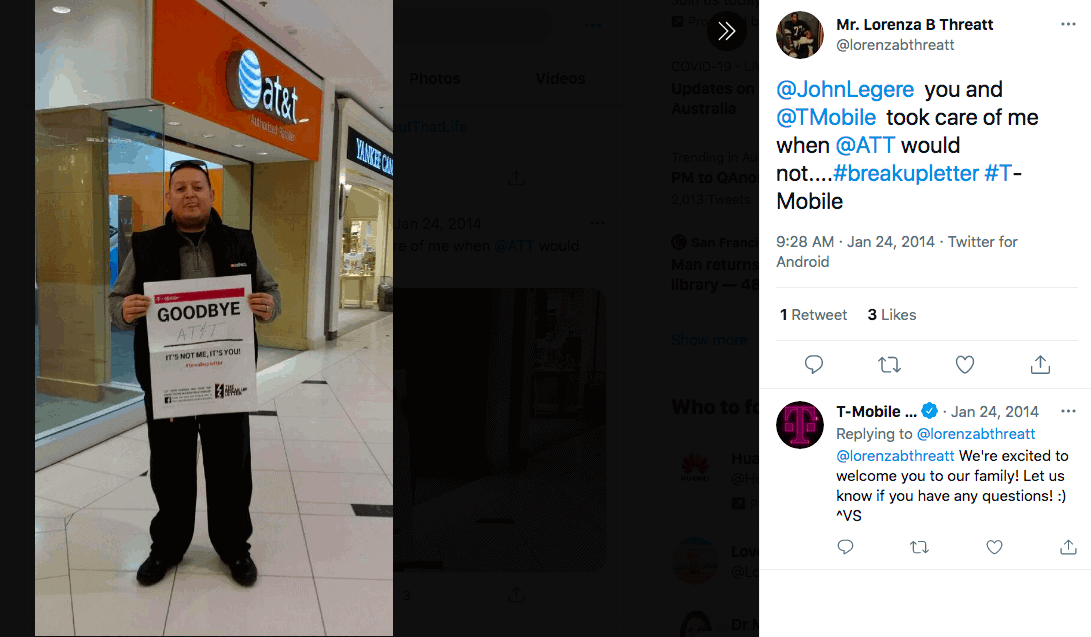 Unless you’ve been living under a rock, you’ll have seen Mastercard’s long-running “Priceless” campaign. While its key message is undoubtedly effective, it had been running for almost two decades and was in need of a major creative refresh.

The brand decided to run a “Priceless Surprises” campaign and amplify it on social media, to highlight the priceless moments that Mastercard can make possible. By rewarding its community, the brand was able to connect with and acknowledge its customers. Customers simply had to use #PricelessSurprises in some way on social media to be in the running to win surprises from Mastercard. Overall, the brand awarded over 70,000 customers with #PricelessSurprises. The prizes ranged from winning a day with Justin Timberlake to premier seats at golf tournaments. Some of these surprises also made for entertaining social content, amplifying the campaign even further. 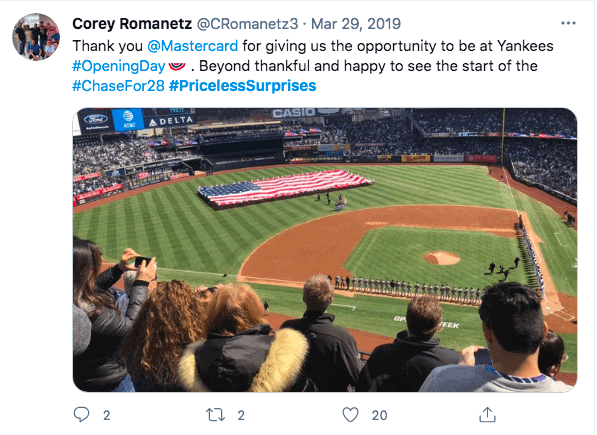 Now that you’re all inspired, the question is: how can you actually adapt one of these UGC campaign ideas, instead of using a cookie-cutter approach? After all, each brand is different and requires UGC for slightly different reasons.

As you’ve no doubt seen, the best UGC campaign ideas place their customers at the heart of the campaign, asking their community to share stories, photos, or opinions. They give consumers a voice and a platform, and they even create a forum where customers can engage with each other. They create digital communities.

For your brand, perhaps your campaign idea could revolve around asking your community how, where, or why they use your products, like Glossier. It could involve some element of personalisation, like Coke. It could offer them a money-can’t-buy experience, like Topshop giving customers the opportunity to appear in their store window. Or, your campaign could give your customers a platform, like Starbucks.

There’s no denying the power of UGC campaigns; they allow you to appeal to new audiences and gather valuable content, at scale. No matter how you approach UGC, if you adopt a customer-centric approach, you’ll be able to produce highly effective UGC campaign ideas like these.

Need a simple way to source your UGC content?

UGC is amazing as it is time-consuming. But if you were looking for an easy way to keep track of hashtags, see where you’ve been tagged, and find creators, you should check out Sked Library.

You can set up an account and see who’s been posting about you in less than 10-mins – try Sked Social free for 7 days right here.